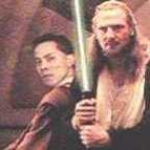 Richard V. Silver was appointed a membership officer of the Vietnamese Adoptee Network (VAN) in 2003.

This is Richard and I’ve love to share my story with all of you.

I was born in April 25, 1972, in Saigon, at least that’s what my birth certificate says. Just a few days after I was born, I was left on a door step of a Catholic Orphanage where the sisters there took me in and provided for me. For 2 ½ years, I resided in the orphanage waiting for a home to go to. There they gave me the name Nguyen Quoc Viet. I suspect my mother was too young to take care of me and knew she couldn’t provide for me. Either that or she wanted me to have an opportunity to go to America and live a better life. One way or another, I ended up here. At age 2 ½, I was adopted by my American parents and flown over to the states on Halloween night…a real treat! I flew into San Francisco at 11:30pm where I met my mom on the plane. Lucky me, I got to fly on a 747!

I don’t remember anything from it; I wish I did. In some cases, it’s better that I don’t. I was raised in a Christian home where I grew up in a strong family with morals and values. But something was still different…me. My skin color was different, my nose was different, even my name was different. I was ashamed to tell people what my middle name was; to a point I still am, just because it’s different. My new given name is Richard Viet Silver. So as a way to accept my heritage, I go by Richard V. Silver.

Growing up it wasn’t all that bad. I didn’t get harassed by anyone, mainly because I wanted to fit in so much that I made myself blend in. However, I didn’t want anything to do with any other Asians, or watch anything that resembled the Asian world. I don’t know why, it’s just the way it was. One of the only movies that I saw that had an Asian person in it was “Enter the Dragon” staring Bruce Lee, so I thought I had to be Bruce Lee. Bummer, I have martial art skills what so ever. I think what really helped me adjust well to the American culture is I didn’t have a strong Asian accent that is carried over from the western world. I am fully Americanized and have no inkling of Vietnamese in me, except my body and soul.

As I got older in school I became more acceptable to different cultures. In high school I was always the one who connected to the foreign exchange students because I knew how it felt to be out of place. I was curious about their homes, so I would ask questions and get some insight about what it’s like being in a different land. I never had an identity crisis, I just wanted to know who I am and what my mission here on God’s green earth was.

Shortly after my first year of college is when I finally got a taste of what my past was about. My sister-in-law works for Holt International in Eugene, Oregon, so I had opportunities to do some volunteer work there. I got to talk to the social workers there and here their different stories from working with other adoptees and parents. I also had the privilege to talk to one of the main workers there who was there at the final baby air lift…what an amazing story he had to tell.

Now that I am older and have two boys, I am able to watch them grow and get a small idea as to what I might have been like when I was little. I only hope that someday my quest will lead me somewhere and give me some positive results.