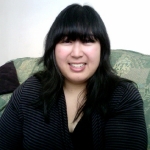 My birthmother was a Vietnamese refugee that fled Vietnam to Hong Kong where I was conceived and born in 1982. I grow up in Hong Kong until I was 16 with my British-expat parents and HK adoptee sister which we all moved to the UK which is where i’ve been since. I’m a freelance artist that mainly works digitally (e.g. photography, video, illustration, computer aided art, web design) and my work usually has an aspect of adoption as part of it.

In 2003 (I was about 21 then) I deiced to explore my adoption as the subject of the finial year project of my Photography degree having before completely denying that adoption had anything to do with me. After that i started to put my feelers out and see who was out there in adoption land. I ended up connecting with Indigo. I was still low key in the adoption community until 2006. After finishing my masters in Media Arts and a two year business development scheme for artists, I decided i’d dive in.

In 2009 an art PhD I’d got onto fell through and I find myself stuck for things to do. Many of the talks I’d done people commented on my sense of humor, and I of course loved art, so i thought, yes i’ll make an online comic so Adopted the Comic which I collabrated on with fellow AVI adoptee Bert Ballard and it ran from 2009-2013. I become involved with a reunion project Chinese Adult Adoptee Worldwide Reunion (CAAWR) which took place in Hong Kong in 2010. Many from the CAAWR group moved on to form the HK Adoptee Network which is a fast growing group mainly based in the UK which I help advice on and created their website.  In 2010 I also met up with adult Vietnamese adoptees from the UK for the first time.

In 2009 I also agreed to be on the advisory committee for AVI and in 2011 I finally was able to contribute to AVI by updating the AVI website =).

I have stepped back slightly from my work within adoption to focus on my illustration and craft career.